Maria Torres Martinez was born on October 22, 1920, in Karnes City, Texas:  an emerging town 50 miles southeast of San Antonio with a population of only 787 people.  The Texas State Historical Association states that the Karnes City economy was “based on farming, ranching, related agribusiness, production, and uranium mining and milling.”  Born to a Mescalero Apache mother and a Mexican father, Maria was part of the “Greatest Generation” from the dawn of the “Roaring Twenties.” That year, the nation saw the birth of broadcast journalism and the ratification of the 18th and 19th amendments – prohibition and women’s suffrage. For those born in this era, the prosperity and abundance of the post-war boom was abruptly undermined in 1929 by the extreme economic adversity of the Great Depression.

1930 kicked off a “ten-year environmental apocalypse” that displaced 3.5 million people from land in Kansas, Colorado, Oklahoma, Nebraska, New Mexico and Texas. This period of severe drought and dust storms exacerbated by negligent farming practices was known as the Dust Bowl. By 1940, Maria, her husband, Luis, and their growing family joined the stream of Dust Bowl migrants and relocated to southern California. According to her eldest son, Abel, they would follow the crops from Colorado, Utah and back to California. 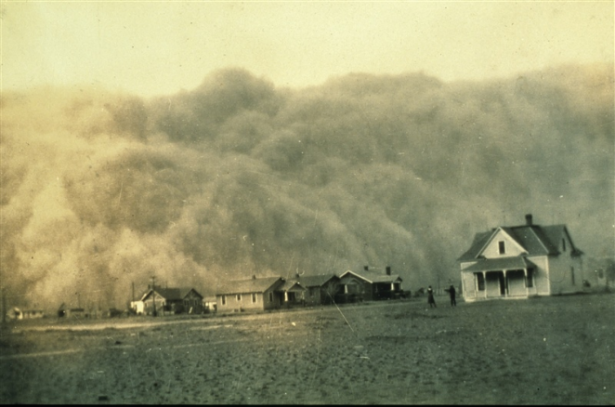 The documentary about Maria Moreno, “Adios Amor,” reports that, at the time, California was “the richest and most productive agricultural state in the nation.”  But this does not mean that agricultural workers prospered.  Rather, farmworkers lived in what one journalist termed “a sprawling rural ghetto” aka “the longest slum in the world.” At one point, Maria, her husband Luis, and their 12 children lived in a one room shack and lived off of $114 a week.

In 1958, a series of floods and the events that followed would spark Maria’s activism. A woman with a passion for ministry and a gifted orator, Maria became the first female farmworker ever hired as a union representative.  The union she worked for was the Agricultural Workers Organizing Committee (AWOC), “a fledgling union sponsored by the AFL-CIO“. In an interview with documentarian Ernest Lowe, Maria described why she joined the union:

The reason we’re working for the union is to try to get the people organized, to get better living conditions, better education for our children, better jobs.

Maria would coordinate rallies, recruit new members, and advocate for improved housing and increased wages.  At a time when the federal minimum wage was $1.00 per hour, farmworkers earned 75-90 cents per hour. Organizers demanded $1.25 per hour.

Due to surmounting legal fees and bad publicity, AWOC’s funding was suspended in June of 1961. Maria was elected by its members to head a delegation that would travel to Miami Beach for the AFL-CIO conference that December.  Featured speakers included John F. Kennedy, Martin Luther King Jr., Walter Reuther and Eleanor Roosevelt.  Maria succeeded there in her mission to restore support for AWOC.

Her involvement was credited with the survival of the farmworker movement.  Her co-worker, Henry Anderson, said that “There would not have been the Chavez movement, at least in the form that it eventually assumed, if it hadn’t been for the survival of AWOC,” and Maria is the one who convinced the AFL-CIO not to cut off funding to AWOC.

Unfortunately, she was soon fired from AWOC and went on to pursue other passions, including becoming a Pentecostal preacher and building a mission on the AZ-Mexico border that ministered to the poor.  Maria’s contributions to the farmworker movement were all but forgotten until the recent documentary, Adios Amor, brought her story back to light.

At AFOP Health & Safety, we collaborate with and fight alongside countless former farmworker women.  We think especially of Norma Flores Lopez, who grew up in the fields and, during her time at AFOP, conceived of and launched the CIFC Art & Essay Contest.  Yesenia Cuello once worked in North Carolina agriculture but now directs the non-profit NC Field, an off-shoot of Children in the Fields Campaign that fights for farmworker rights in North Carolina.  It’s important never to underestimate the ability of campesinas to influence their community, regardless of their level of education.  If the doors of opportunity are opened up to more Maria Morenos, there’s no limit to what can be accomplished.